To protect the troops and ammunition, Germans built a dozen of SK-designed underground structures with walls of concrete or stone 50 cm thick.

These shelters were equipped with wooden doors and fitted with a heating system, splinter-proof walls and exits which, in some cases, were used as skylights and ventilation. However, no shelter had ventilation or protection against poison gas. This is explained by the fact that, to avert a possible gas attack, every man of the garrison (ten men on average per shelter) was in possession of a gas mask. Only the soldiers working inside the command posts were exempt. 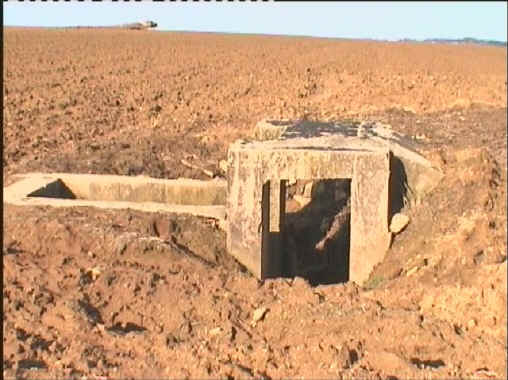 An example of personal shelter : the entrance to the semi-buried shelter # 11.

Shelters "guard posts" north of the site, on the west side and on the other side of the road, are the only one of this type available to the public.

Other shelters, partially filled, are located on private land. They are not accessible to the public without permission.